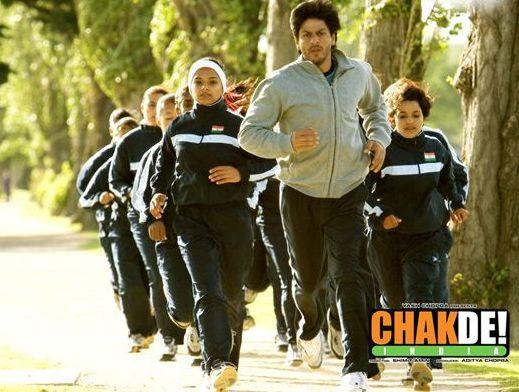 Chak De! India has once again done Yashraj Studios and the whole country proud. The movie has won the prestigious Billie Award in USA. Billie Awards are given away every year for media excellence in portraying and promoting women in sports. The awards are given in four categories, namely: breakthrough and innovation, entertainment, journalism and outstanding journalist. It’s not hard to guess that “Chak De India” has won this award for entertainment.

Chak De India is the story of a disgraced hockey player reappearing on the scene as a women’s hockey team coach. SRK plays the character of this coach with aplomb. The girls chosen to play hockey under SRK’s coaching are equally good. One of the major highlights of the movie is the title song by Sukhwinder. Only Sukhwinder could have done complete justice to such an energy filled song!

The Billie awards are named after the legendary US tennis player Billie Jean King. Billie Jean won 12 Grand Slam singles titles, 16 Grand Slam women's doubles titles, and 11 Grand Slam mixed doubles titles. She has been very interested in women’s issues and has advocated the removal of sexism from sports. She is best remembered by everyone for the famous Battle of the Sexes in 1973, in which she defeated Bobby Riggs- a former men’s Wimbledon champion.

King Khan is sure to be excited about this award, even though it’s not his first! The Yashraj camp is equally excited. "The film continues to pay back the faith we had reposed in the movie even when conventional wisdom would have dictated otherwise. To win accolades like this from around the world, especially from places where depictions of women's sport has had a long and established tradition is especially heartening," said Yash Chopra , chairman Yashraj Films.

"It was an honour to be selected by such a distinguished panel of women's sports historians, journalists and media industry executives. But while we cherish this honour, the greatest reward for the movie was undoubtedly the love and affection that was showered on it by audiences worldwide," he added.

A movie about women’s hockey, one about car racing and one more about boxing. All in one year! Sports based movies seem to have really arrived in Bollywood.

Why Are Women Attracted To Married Men?

The All New “Chak De!” Team

Katrina And Nargis At Hockey India League Match In Lucknow