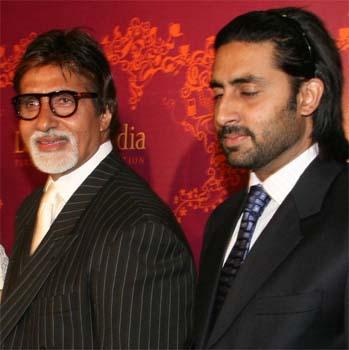 After playing Abhishek's father in the movie, Sarkar, BIG B has been promoted to a generation older by director, Rakesh Omprakash! Dad B will now play Son B’s Granddad in their forthcoming film Dilli 6.

Only some time ago, Abhishek Bachchan had disapproved of the idea of playing the younger Bachchan in Shoojit Sircar’s in-the-making film Shoebite’. Contrary to this, the older Bachchan has happily agreed to act in Mehra’s semi-autobiographical flick… and that too, for playing his own son’s grandfather!

The duo, Amitabh and Waheeda have given many hit films together in the 70s and 80s. Now, the couple is making a comeback onscreen after a long gap of 25 years!

Mehra has always been a very big fan of this refined actress and had insisted on her playing the role. She was also a part of Mehra’s earlier revolutionary movie Rang De Basanti

Abhishek and Rohit Meet The Fans at Bol Bachchan Screening