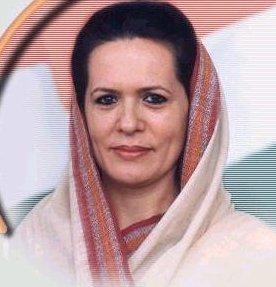 Until last week, a recent Bollywood movie was supposed to get a “no-objection certificate” from Congress President, Sonia Gandhi before being screened! The Censor Board of India had ordered the producer of this movie to take her permission before releasing the movie.

Not that she has been loaded with the responsibility of the censoring films in India. The film already had obtained the ‘no-objection’ certificate from the Censor Board along with a ‘U’ certificate. Which means the movie was eligible to be screened anywhere in India Indian.

Yet it needed an approval from the leader. That’s because this is no ordinary movie. The movie is titled Sonia Sonia and is based on the life of Sonia Gandhi!

Film producer, Thakur Dinesh Kumar was told to obtain the certificate from Ms. Gandhi in December 2005. But recently, the Censor Board withdrew the condition that its film maker should get the consent of the congress leader.

Kumar claims that after getting a notice from the Censor Board, requiring consent from Gandhi, he sent letters to her, seeking her NOC.

But he got no reply, he says. Then again he approached the Board, saying no-reply may be construed as a ‘no-objection certificate’; but CBFC declined to allow the film’s release.

So, he approached the Bombay High Court, where his lawyer Shyam Keswani put forward the point that CBFC had no right to impose such a pre-condition under the law.

Considering the tense situation, CBFC decided to withdrew the condition and the High Court disposed of the petition.

All’s well that ends well. And so, you will soon get the opportunity to know about the life of Sonia Gandhi in the movie Sonia Sonia.

Tulsi Virani And Her Gandhi Connection

Manoj Bajpayee: The Central Board of Film Certification has "always been unfair"