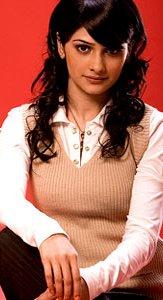 Does anyone recognize this pretty damsel? Sure, she doesn’t look like your regular ‘sati savitri bahu on the telly’! But that is exactly what this babe is, people. She is your “Baani” from “Kasamh Se” . Actually many of you would recognize Prachi Desai, thanks to her stint in “Jhalak Dikhla Ja” . From being a much loved bahu on the Indian telly, to winning a prestigious dance-based reality show, to a dream debut on the big screen! Ms. Prachi Desai is surely making newsthese days!

Prachi has been roped in by none other than Farhan Akhtar to star in his and Ritesh Sidhwani’s next movie titled Rock On. Reports are in that the pretty damsel has already started shooting for this project. Wanna know who she will be starring with, in "Rock On"? Prachi’s costars include Arjun Rampal, Purab Kohli, Sahana Goswami, Luke Kenny and Mr. Farhan Akhtar himself. Yes, "Rock On" will be the launching pad for Prachi’s as well as Farhan’s acting career in Bollywood. Isn’t this so exciting?

"Rock On" is a story about 4 friends who start a rock band but somehow lose it midway. And as the script writers would have it, the friends meet again after 10 years. Now begins the real story, with a journey into their past and picking up from where they had left off. The story sounds promising and should definitely appeal to the youth.

If you are wondering who gave Prachi this wonderful haircut, it’s Adhuna Akhtar, Farhan’s wife. The movie is expected to be ready for release somewhere around September 2008. Guess we won’t be seeing too much of Prachi in Kasamh Se, for the time being. TV’s loss is Bollywood’ gain!

A glimpse of Rock On 2

Your Wait For "Rock On!" Sequel May Soon Be Over

We Will Miss You Bani, Kasamh Se!

Is Aditi Rao Hydari reason for Farhan and Adhuna's separation