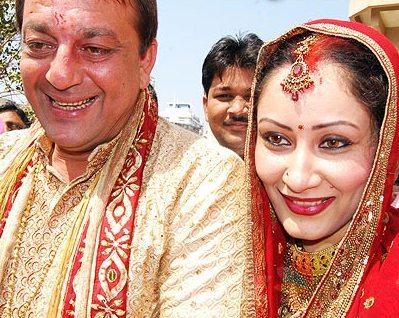 All Sanjay Dutt and Manyata did last year was deny the reports of a marriage. They stuck by their “close friends” stance throughout the year. Sanjay had a not too good year. 2007 was marked by his two innings at the Pune jail. But long-time girlfriend Manyata stood by him through thick and thin.

She was there when he was taken to the jail in Pune, following him in a car. She was by his side when he performed all those big poojas at all the famous temples in India. By the way, isn’t that something that only wives do? Anyway, the whole media was in a frenzy trying to prove that Sanjay Dutt was indeed married to Manyata. But nothing worked. They lived together, they prayed together, they even holidayed together, but they were “just close friends”.

Recently, rumor mills started working overtime when Sanjay and Manyata issued a joint message in the papers. The message read “Sanjay and Manyata Dutt”. Yet no confirmation of marriage! A few days back, Manyata was seen wearing “sindoor”. Now that had to be a clear indication of a marriage, right? It is reported that the couple actually got married in a court on 7th of February, 2008. Yet, nothing like an admission of the same came out of the whole media circus surrounding the two.

But all this hoopla has probably made Munna see that his life isn’t his alone. The country that adores him wants to know every little bit about his personal life. And his fans want to see him married and happy. Everyone can be happy now coz the big star tied the knot today in a traditional ceremony. Good Luck to the happy couple.

Find out: Why Sanjay Dutt fixes his meeting with stuntmen

Manyata is eager to play peacemaker between Salman and Sanjay