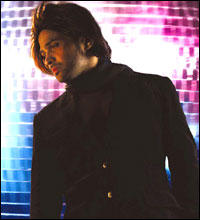 Remember Rishi Kapoor’s Karz, one of the greatest movies ever made in Bollywood? This is the movie that inspired our very own Shahrukh Khan and Farah Khan to make Om Shanti Om, the most successful Bollywood movie till date. And now, Karz has inspired Himesh Reshammiya to finally take off his cap and give us a glimpse of his crop.

The scoop is that Himesh is starring in this remake of Karz, being produced by T-Series. Director Satish Kaushik has been given the task of making this movie with Himesh in the lead role. The movie is being called Karzzz! What’s with all those zzz people? Super numerology at work here we suppose. Anyway, the leading lady in Karzzz is another debutante, Shwetha. Shwetha is producer Indra Kumar’s daughter, in case you were wondering. She will play Tina Munim’s role. But the interesting bit lies in the role essayed by Simi Garewal in the original. Guess who’s bagged that bitchy role? Urmila Matondkar, guys!!!! Me thinks she’s going to do more than apt justice to her role.

Bollywood is such a mystery yaar! People, critics and actors had all written off Himesh Reshammiya, the actor. But looks like our producers have a different viewpoint altogether. The success of Aap Ka suroor has inspired many to bank upon this musician-turned-singer-turned-actor. Himesh ji, will you leave anything at all for other people to do?

Himesh Reshamiya’s next film Heeriye is an action thriller

Watch The Trailer of 'I Me Aur Main' - John Abraham, Chitrangadha & Prachi Desai