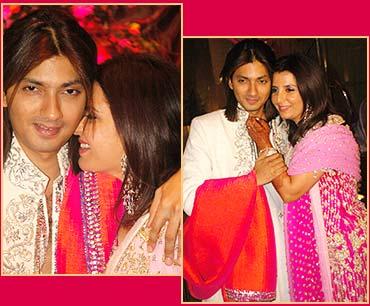 Guess who is most excited for to-be-mumma, Farah Khan? It’s no other than her best pal Shah Rukh Khan! That’s why Gauri and Shah Rukh Khan hosted a grand Godh-Bharai function at their home Mannat for Farah Khan!

Farah is expecting ‘triplets’ in February, but has decided to shift to the hospital right away. This is because it takes a lot of time and becomes very painful for her to travel all the way to the hospital every time from her place.

So, before she shifts to the hospital, Shah Rukh and wife Gauri invited Farah Khan and her husband Shirish Kunder for a grand diner at their home, Mannat.

Shah Rukh’s wife Gauri and friend Karan Johar organised a lavish ceremony for Farah’s Godh Bharai. She was showered with gifts, books on motherhood, baby names, maternity clothes that Shah Rukh especially brought for her from overseas and tons of other mother care goodies!

Apart from the four, the other people invited to the grand celebration were Karan Johar’s mother Hiroo, Riteish Deshmukh, Sajid Khan, Mushtaq Sheikh and Kaajal Anand.

Millions of media persons had gathered around Mannat to cover the splendid event! Though most guests shared their happiness with the curious media persons, our would-be-father did not step into the limelight even to express his joy of becoming a father! Where Farah Khan has always been bubbly, cheerful and chirpy, her husband is known for his shy nature… Kisi ne sach hi kaha hai, opposites attract!

But of course, the joy of becoming a parent cannot be put into a few words! We wish Fatah Khan and Shirish Kunder a very happy parenthood!

Farah Hooks Up With A New Khan!

SRK And Kajol A Romantic Number For Dilwale

Happy New Year Star Casts On The Sets Of KBC

Shirin Farhad: Watch Out For Them!