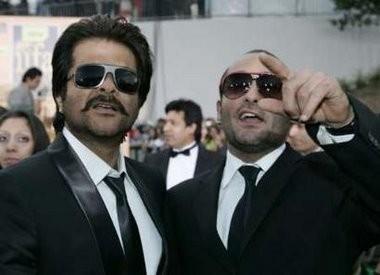 There was a time when all that a movie needed to become a talk-of–the-town was one BIG star. But now, the pubic is no more satisfied with one…and the trend has shifted from one or two to multi-starrers making ripples at the box office!

Anil Kapoor has also jumped into this multi-starrer pool of movies with his upcoming film Race! Apart from having an international appeal, the film also boasts of its unusual star cast! In the action-thriller, Anil Kapoor will be seen with Saif Ali Khan and Akshaye Khanna!

Although, at different points of their careers, all the three stars have worked with each other! While, Saif and Akshaye shared an intense bond of friendship in Dil Chahta Hai, Saif became pally with Anil towards the climax of Biwi No. 1!

That’s not all; Akshaye has even acted in Anil's home production Gandhi My Father and will be doing so again in his next production, Shortkut - The Con Is On!

Now, that really sounds like a long association! Yet, Race boasts of its ‘unusual’ star combination? Race is an Abbas Mustan film, and is an out and out action entertainer with Saif and Akshaye playing half-brothers while Anil playing a detective. The film is scheduling itself for a release in March 2008.

Race:2 On The Tracks!

Saif makes Kareena a part of him, forever!

Akshaye Khanna glad to be dropped from party

Saif,Deepika And Anil On The Front Row With Anupama Chopra

Amisha Patel,Anil Kapoor,Saif Ali Khan on the Sets of Race 2

What Are You Buying Today?
LATEST EVENTS / GALLERIES
Most Read
...loading